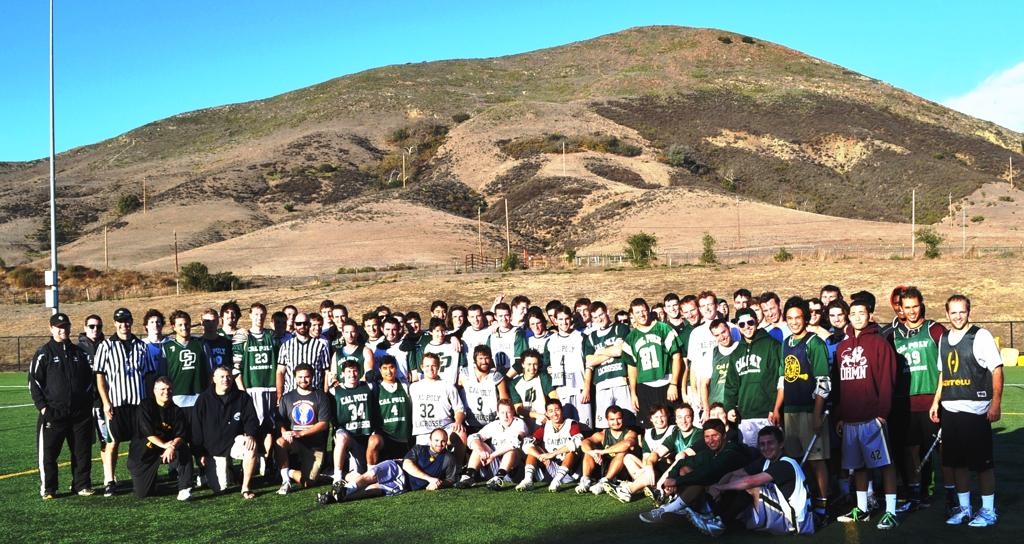 After a rare Alumni victory in 2012, the current Mustang squad was eager to get back on the winning track against a powerful CPLAX Alumni team.  The annual game shaped up to be a possible nail biter with both sides fielding talented line-ups from top to bottom.

The Alumni squad came into the contest featuring a high-powered offense with former All-Americans Tim Casey, Scott Heberer, Brian Kovary, Colin Mason, and Olivier Schmied in the starting lineup. The Alumni also had an All-American between the pipes, as Nick Czapla made the move to the alumni side and was geared up for his first Alumni game start against the current team.

If the Alumni squad looked imposing on paper, it was also apparent that the current team was going to be a lot stronger than last year’s squad. Returning the top four scorers from their 2013 team, the Mustangs also welcomed back Tim Albo, Dylan Gonsalves, and Zack Jones this fall, who were all key offensive contributors during the 2011 and 2012 seasons. Along with a more imposing offense, the Mustangs returned much of their 2013 defensive personnel, with Sebastian Zorn, Nico Tornaghi, and Luke Willon being named the Alumni Game starters.

Despite the Alumni’s talent and scoring prowess, they were no match for the current team as the Mustangs ran away with a comfortable 15-5 victory. The Alumni’s lack of depth on the defensive side of the field combined with a dominating performance by the current team’s face-off crew insured that there would be no repeat of last year’s Alumni victory.

The Alumni opened up the scoring on the day but the current squad quickly answered back on goals from Matt Dobbs, Gus Samios, and Dylan Gonsalves to take a 3-1 lead after one. The Alumni kept it close in the first half on a couple of top shelf rocket shots from Scott Heberer, but the current squad held a 6-4 lead going into the break. The second half belonged entirely to the younger and better conditioned Mustangs, as they scored nine unanswered goals before the Alumni finally notched their only goal of the half.

For the current squad, midfielder Matt Dobbs led the scoring with 3 goals and an assist, while the starting attack unit of Dylan Gonsalves (3g), Joseph Sarjeant (1g, 2a) and Scott Herrington (1g, 2a) added three points apiece. Midfielders Gus Samios (2g) and Sean Curtis (2a) each notched two points, while fellow midfielders Tim Albo, Zack Jones, and Chris Yoshida along with attackmen Joe Dresser and Parker Williamson each added a goal to round out the Mustang scoring.

We want to thank all of the CPLAX Alumni who made the trip to SLO for the big game, and supported the current squad with our biggest fundraiser of the season. We hope to see all of you during the upcoming 2014 season.  Your support helps drive the continued success of Cal Poly Lacrosse!!!