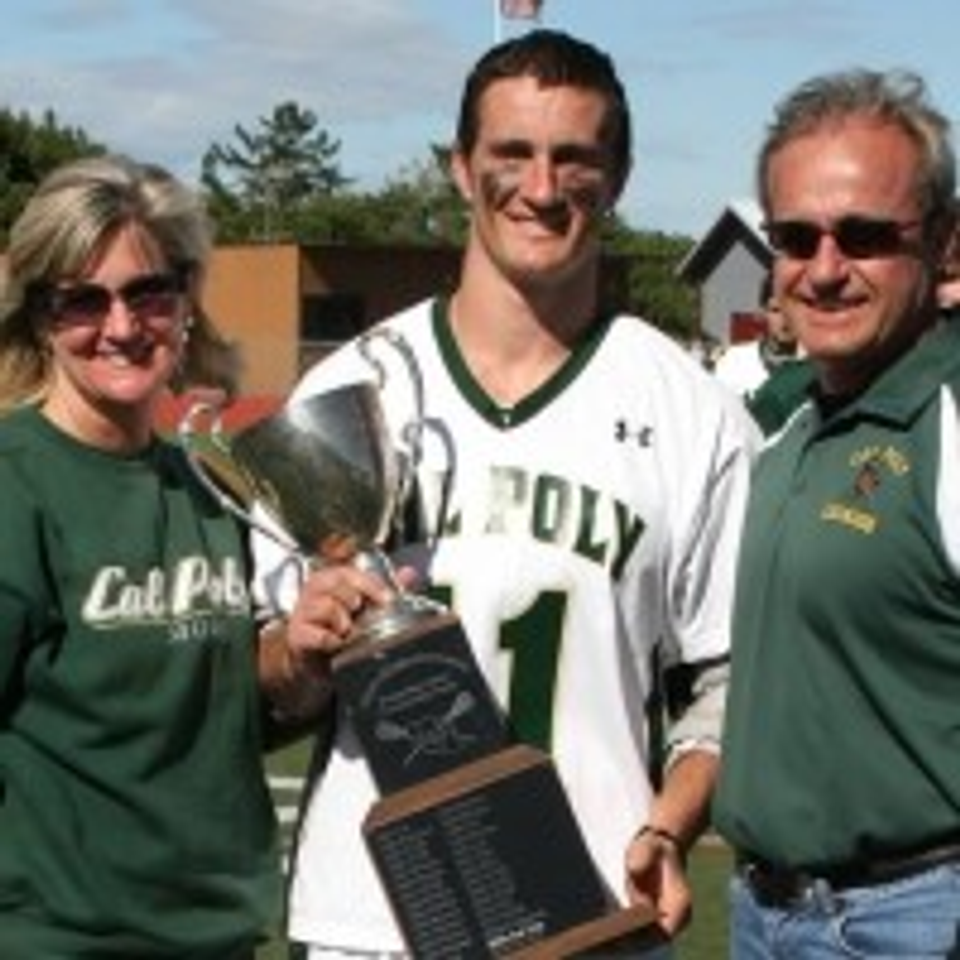 Matt and his parents with the 2011 WCLL Championship Trophy. 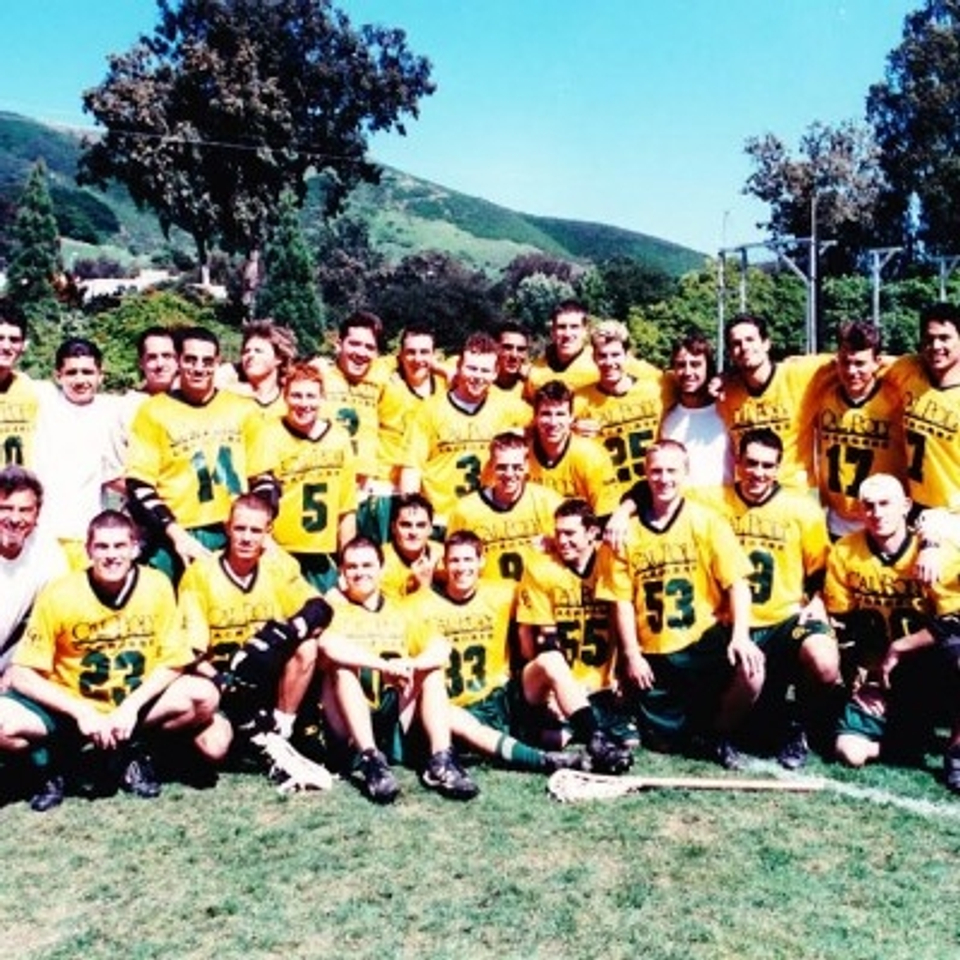 Matt joined the program in 2008 after a highly touted high school career at San Ramon Valley High School playing for legendary coach Peter Worstell. He had an immediate impact for the Mustangs, grabbing a spot on the 1st midfield line as a freshman and taking the majority of the team’s face-offs. He dominated on the draws throughout his playing career, not just winning control of the ball but frequently winning the ball to himself and becoming an immediate offensive threat. Matt led the team in ground balls all four seasons and averaged over 30 points a year on the offensive end.

Matt was a complete player at a demanding position. He dominated at face-offs, played stalwart short-stick defense, and represented an imposing force on the offensive end. Matt’s accolades are fitting for a player of both his caliber and impact. In his 2008 freshman season, Matt was named a WCLL All-Star as a face-off specialist. In his sophomore year, he earned 2nd Team All-League midfield honors. He was a 1st Team WCLL All-League midfielder in both his junior and senior seasons, an honorable mention All-American as a junior, and in his senior year Rudow earned a 1st Team MCLA All-American award. Matt was just the second Mustang player to be named a 1st Team All-American, joining fellow CPLAX Hall of Famer Tim Casey in earning that national honor. Besides being a complete player and an opponent’s matchup nightmare, Rudow also had a well-earned reputation for seizing the big moments. His ability to carry the team on his back when things weren’t clicking offensively or to seal away a victory with a well-timed face-off win and unassisted goal was legendary.

Matt was not just a talented player, but also a leader on and off of the field and a tremendous teammate. Matt was voted by his teammates as a captain for both his junior and senior seasons, and his dedication and ability to lead by example was a major contributor to the program’s ascendance to a national MCLA power during his playing career. He played a key role off of the field as well, serving as the Team President for his junior and senior seasons.

He was also a key member of the 2012 coaching staff. Just months after finishing up his collegiate playing career, Matt came on board as one of the offensive coaches and the lead coach for face-offs. His efforts were instrumental in helping guide the 2012 team to a 4th consecutive WCLL league title and eventually all the way to the MCLA National Championship title game.

Cal Poly Lacrosse is proud to select Matt Rudow to the Hall of Fame in his very first year of eligibility.

Kevin Flanagan (1997 – 2000): Kevin arrived at Cal Poly at a critical time for the lacrosse program. After a few rough years in the early to mid-1990’s, the team started a rebuilding process with the help of Head Coach John Lagoy during the 1995 and 1996 seasons. After the 1996 season, Coach Lagoy departed when his career took him out of the area and former Mustang player Marc Lea came on board as the Head Coach. Flanagan’s arrival that same year was critical for a young program on the rise. Kevin was a complete player who led by example; he was humble, hardworking, and really loved the game. He encouraged other lacrosse players and even non-lacrosse players that were good athletes to join the program and help build the program’s overall talent and depth.

From his first day with the program, Flanagan was instrumental in solidifying the Mustang offense and improving the morale and work ethic of a young program striving to get better. Hailing from San Dieguito High School in Encinitas, Kevin came to Cal Poly with the experience of playing in the best high school lacrosse region in the state and he helped establish the connection between the Cal Poly program and the northern San Diego area lacrosse hotbed that would help build the foundation for the program’s future success.

Kevin was a talented attackman who led the team in nearly every offensive statistical category throughout his career. He was an unselfish player who strived to get his teammates involved in the game, but who wasn’t afraid to carry the team on his shoulders when the game was on the line. Perhaps, this is best exemplified from a playoff game versus rival Chico State in his freshman season.

It was 1997 and the Mustang squad was taking on the Wildcats in the old football stadium. Behind for much of the 2nd half, Kevin scored a goal with only minutes remaining to send the game into overtime. In the team huddle before the overtime period began, Kevin asked if overtime was sudden death (it was the first overtime game of that season and the first overtime game in Flanagan’s college career). When it was confirmed, that yes indeed it was sudden death, Kevin said “we’re going to win this game. Just get me the ball.” He wasn’t bragging – he was just being realistic. Kevin had been our primary offensive weapon that entire season. In our first possession, we got Kevin the ball, the double team came late, and he fired the winning goal in the top corner. Flanagan had four points on the day (3g, 1a), but more indicative of his overall impact is that he scored the final three goals of the game, including the game tying goal in the fourth quarter and the game winner in overtime.

The list of Flanagan’s accolades and accomplishments as a Mustang is extensive. He was named captain in three consecutive seasons (1998, 1999, 2000), an accomplishment that has only occurred a few times in the history of Cal Poly Lacrosse. He was the team’s leading scorer in each of his four seasons and he received WCLL 1st Team All-League honors in all four of his seasons, another extremely rare accomplishment in the history of the program. Kevin was instrumental in the program’s overall success off of the field as well. He served as the Team President in 1999, and made major contributions in laying a foundation of success that the program continued to build upon after his graduation.

It is with great honor that we name Kevin Flanagan as a 2016 inductee into the Cal Poly Lacrosse Hall of Fame.