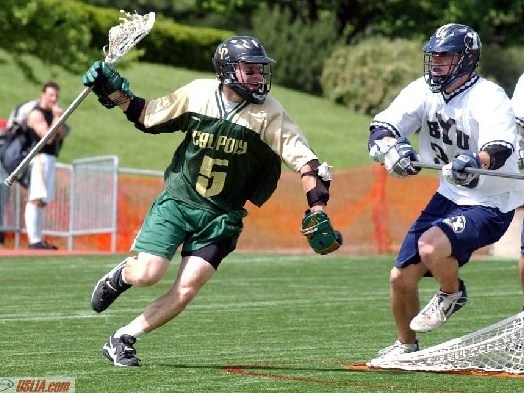 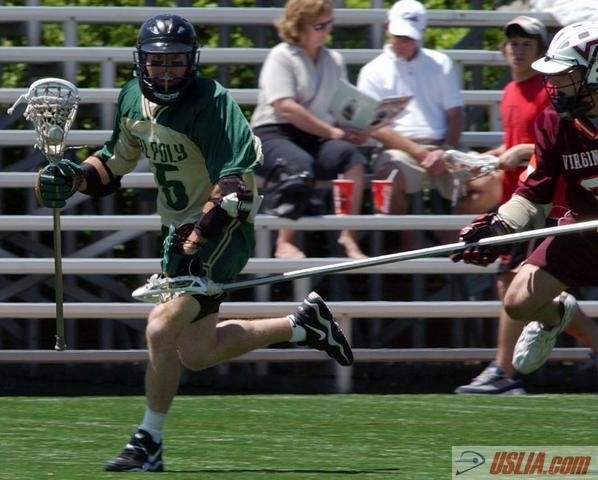 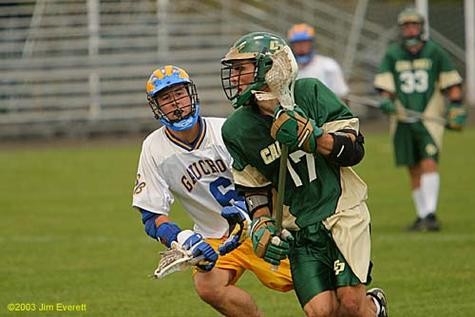 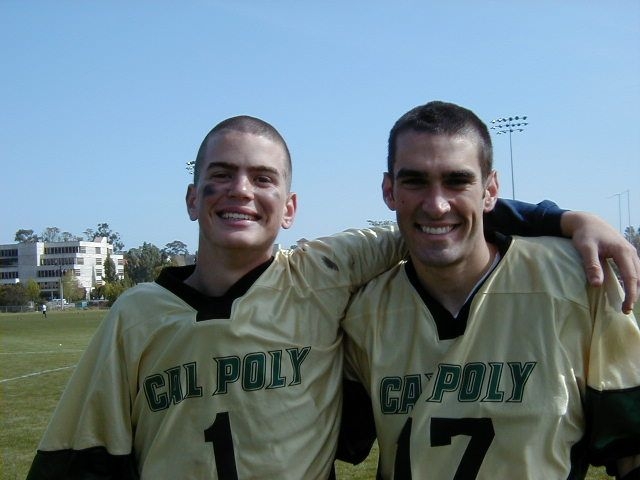 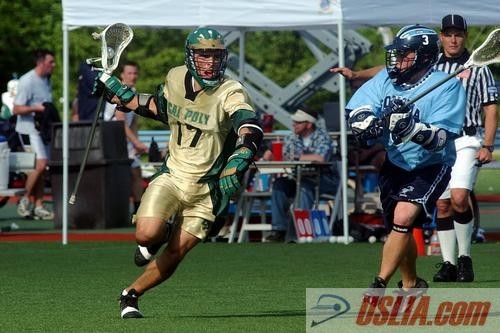 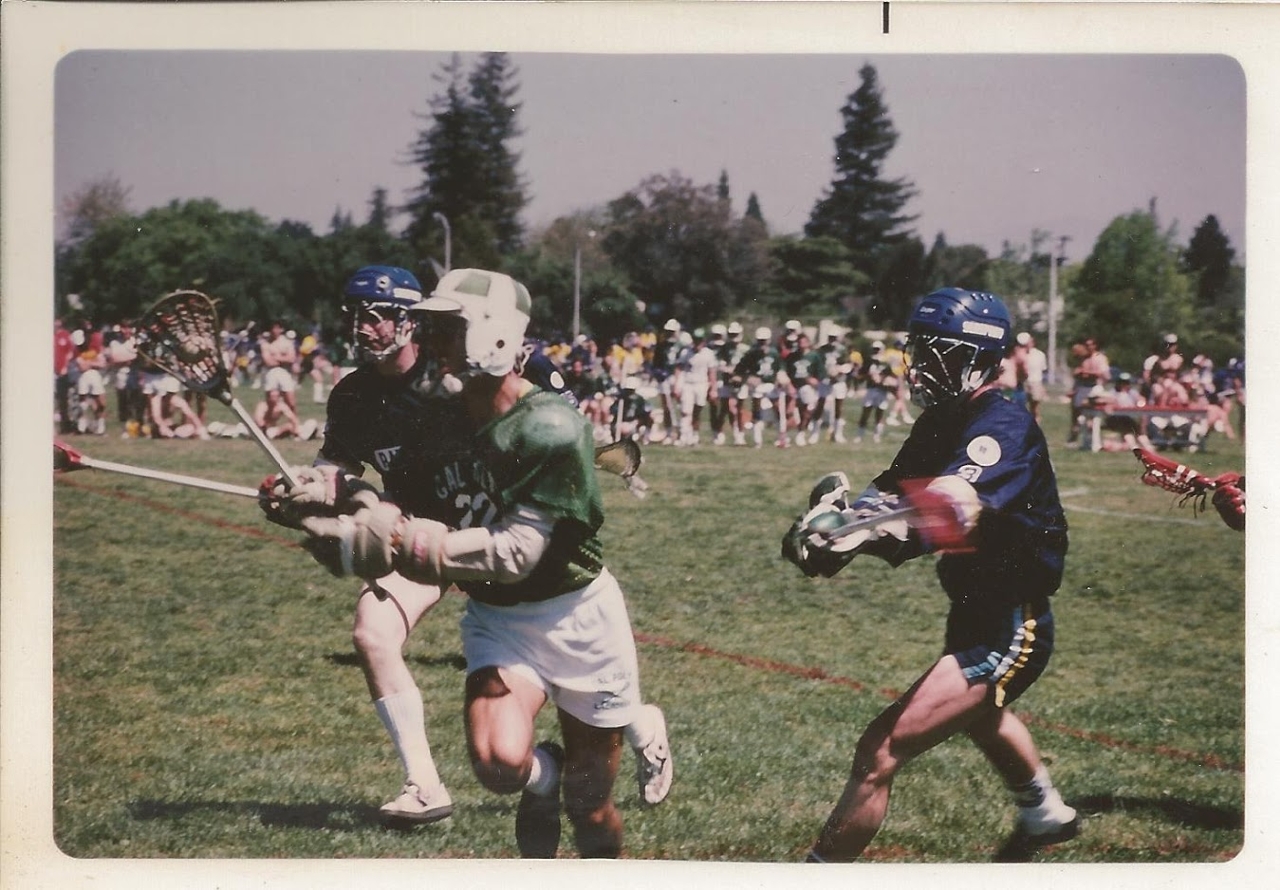 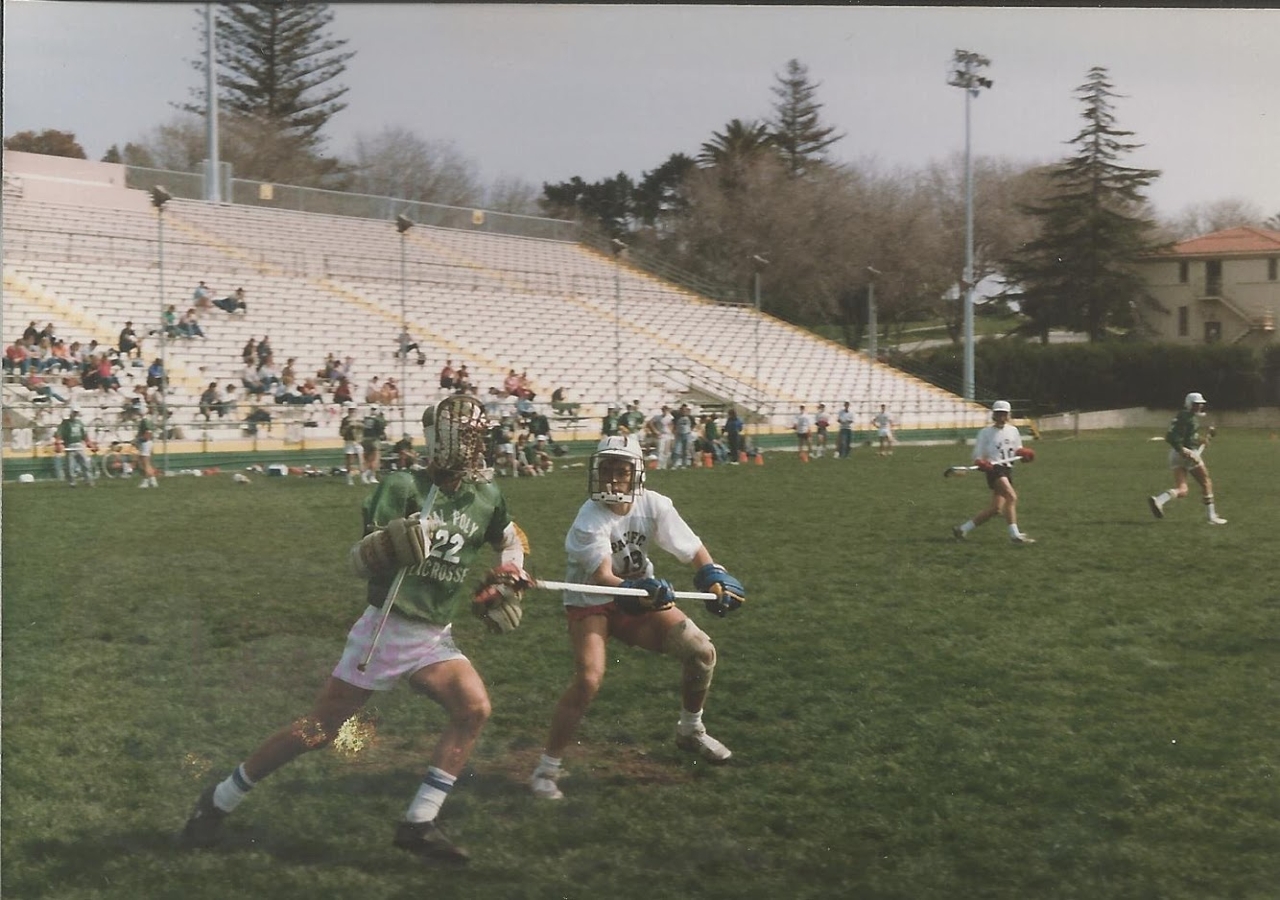 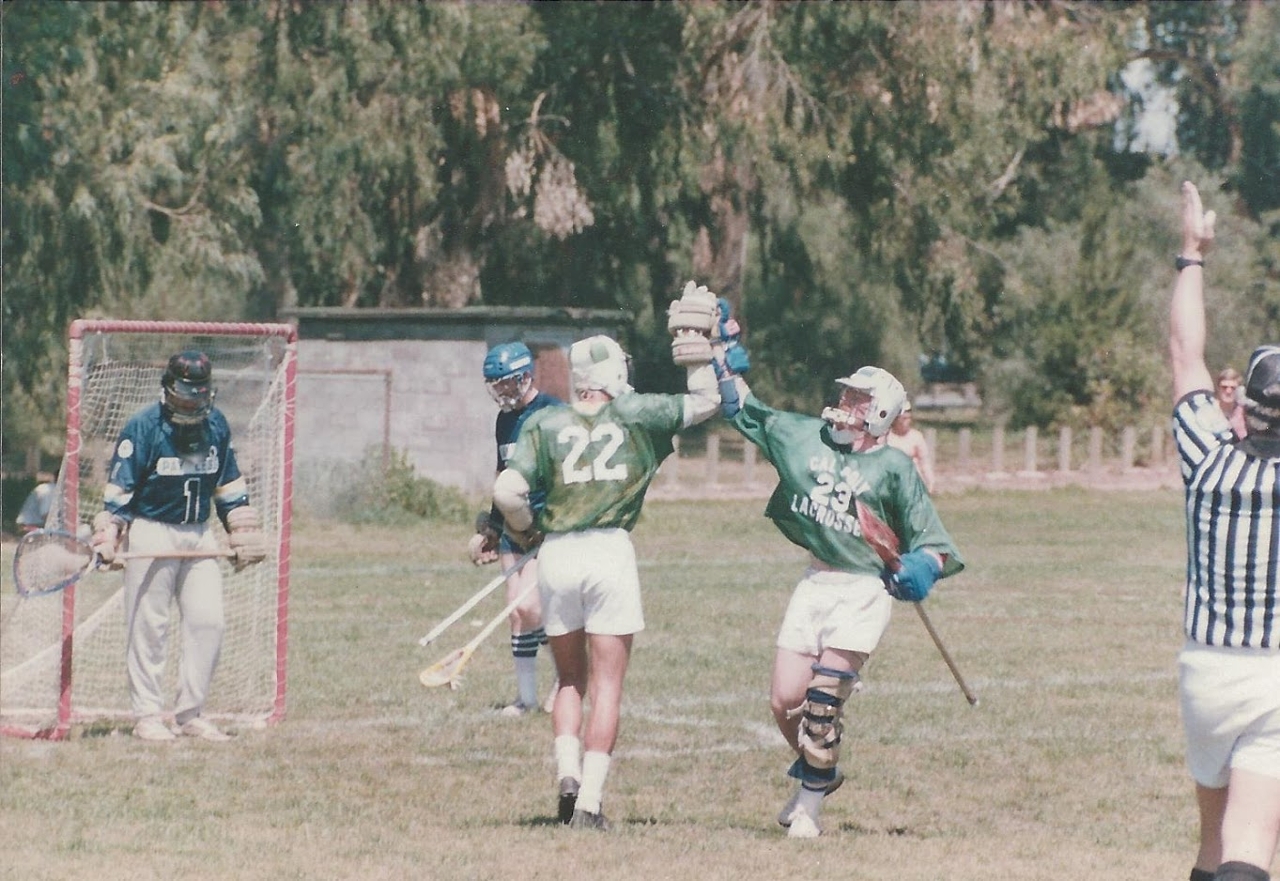 Jim Fipp (1999 - 2002): Jim was a team leader and a key player in each of his four seasons with Cal Poly Lacrosse. As the team’s offensive focal point throughout his playing career, Jim was instrumental in helping the Mustangs transition from a scrappy, hard-working Division 2 team into one of the MCLA’s elite programs. The growth of the program over Jim’s career was tremendous. When he arrived in 1999, the Mustangs were a solid Division 2 team capable of making the league playoffs, but by the end of his career in the 2002 season, Cal Poly had made a rapid transition to Division 1 and earned their 1st appearance at the MCLA national tournament. That 2002 squad set the stage for a Mustang program that continues to excel to this day, and has gone on to win seven WCLL league titles and earned twelve trips to the MCLA National Tournament in a sixteen year span.

Fipp was an absolute force on the offensive side of the field. As a four-year starting attackman, Jim was the team’s leading goal scorer and always near the top in total points. Fipp was a pure scorer and used a lethal combination of explosive speed, toughness, and determination to earn key goals in critical moments. Fipp still holds the Cal Poly team record for goals in a single game pouring in 8 goals and adding an assist for good measure against the Pepperdine Waves in a regular season game in 2001.

The hallmarks of Fipp’s Cal Poly career were marked by his consistency and constant effort on the field. Jim never took a game off and thrived under the demands of facing our toughest opponents. Although he holds the record for goals in a game, Fipp’s most impressive statistic was that he scored in every game. He was, quite simply, impossible to keep off the scoreboard, even when drawing the opponent’s best defender and dealing with early slides and double teams. Fipp tallied 3 points a game like clockwork, and although he certainly had a lot of games with higher point totals, he could be counted on to put up points against even the stiffest competition and in the most important games.

Fipp led by example, and his hustle and tenacity on the field were unmatched. You would be hard pressed to name a Mustang attackman who rode better than Fipp, and some of his biggest career highlights came not on drives to the cage but on plays where Jim chased down unwary midfielders, leapt through the air near midfield, and unleashed a wicked flying one-handed tomahawk check to dislodge the ball and create the turnover.

Fipp’s awards and accolades earned during his Mustang career were numerous.  He was a four-time league all-star, earning 2nd Team WCLL honors at attack in 2002 at a time when the WCLL was comprised of over 30 teams and covered most of the western United States. He also earned Honorable Mention All-American honors in his senior season. Jim’s ability and leadership were recognized not just by the league but by his teammates and coaches, as he was awarded team MVP in 2001 and 2002 and served as a team captain in 2002.

It is with great pride that the Mustang alumni name Jim Fipp as a 2017 inductee into the Cal Poly Lacrosse Hall of Fame.

Andrew Parr (2000 - 2003): Perhaps no era in the history of Cal Poly Lacrosse has been more significant to the overall success of the program than those seasons right around the turn of the new millennium. It is those teams that vaulted the Mustangs on to the national stage, and established a foundation of success that has continued to be built upon in the years that followed. Andrew Parr was a key player and critical team leader on those teams in the early 2000’s, and he had a lasting impact both on and off the field.

Parr was a talented and versatile midfielder and an unparalleled team leader. He was one of our biggest scoring threats at the midfield position, while also playing a key role on the defensive end and routinely drawing the assignment of matching up against the opponent’s biggest scoring threats. He had a knack for scoring goals in crucial moments, and his speed and agility in the open field was a joy to watch.

Andrew had tremendous talent, but it was his perseverance, dedication, and toughness that really elevated his importance on the field. Parr logged more minutes than any player on the field besides the goalie, playing offensive midfield, taking face-offs, leading the team in ground balls, and playing tenacious short-stick defense. He was instrumental in the clearing game, often using his speed and ability to power through traffic and serve as the team’s “one-man clear”. He also played on the man-down unit, and by utilizing his understanding and knowledge of the game, served as another coach on the field.

Parr’s on-field accolades were numerous. He earned all-league honors and was also named to the All-American Honorable Mention team in his senior season. He was a captain in his senior season along with two other Cal Poly Lacrosse Hall of Fame honorees – Tim Casey and Sean Whitacre. The most impressive statistic that Andy compiled during his stellar four-year Mustang career was that he did not miss a single game – a testament to his training, dedication, and toughness – and a fitting symbol of the consistency and constant effort that Andrew gave to Cal Poly Lacrosse on a daily basis.

Parr’s efforts off of the field had nearly as big of an impact on the program as his on-the-field attributes. He served as the Team President for three straight seasons and stayed on to help coach in 2004 after his playing career ended. He won the team’s Dedication and Service Award in 2004. The love and dedication that Andrew has for this program helped draw another important Parr to the squad. His younger brother, Ryan, joined the program in 2002 and went on to become one of the best goaltenders in program history. If there was an award for best brother duo in the history of the Cal Poly Lacrosse program, the list would certainly start with the Parr brothers on top.

By the time Andrew’s playing career had ended, he had led the team to two straight national tournament appearances and, more importantly, helped instill a mindset in the program’s players where no one would settle for less than their best effort. He wasn’t always the flashiest player but no one was more important to our overall success on the field. He was the heart and soul of the team - a tireless worker, an emotional leader, and a player not afraid to take the game into his own hands when the situation demanded it.

It is with great pleasure and admiration that the Hall of Fame Committee selects Andrew Parr as a 2017 Inductee into the Cal Poly Lacrosse Hall of Fame.

Gary Schare (1983 - 1986): In the early days of the Cal Poly Lacrosse program, Gary picked up the torch from the founders and originators of the team – guys like Paul Ramsey and Scott Graham – and helped build on the program’s successful first few seasons. Gary was passionate about lacrosse and he was instrumental in maintaining the Mustang program, which in the original days of west coast lacrosse, had to constantly spread the word and recruit new players to an unfamiliar game.

On the field, Gary was the team’s offensive backbone. He led the team in points throughout his career, and served as a coach on the field – directing traffic and assisting his less experienced teammates from his attack position. Gary had a flair for the dramatic, and put in his best games in the biggest spots.

Long before the MCLA even existed and well before a collegiate club team National Championship was even dreamed about, the biggest annual lacrosse event on the west coast was the iconic Western States tournament. At Western States, a mix of California college squads faced off against post-collegiate club teams for bragging rights of the best team west of the Mississippi. In 1985, Cal Poly squared off against the famous Seaspray squad – an absolute juggernaut from Victoria, B.C. that was loaded with professional box lacrosse players and had only lost a few games in their entire existence. Gary led the squad that day, pouring in three goals and dishing out a couple of assists as well, as the upstart Mustangs put a scare into the elite Canadian team. At the end, the Mustangs couldn’t quite pull off the monumental upset, but the leadership of Schare on the field led the Mustangs to their best ever showing at Western States and set the tone for the coming years of the Cal Poly Lacrosse team.

Gary served as Team President and was a diligent administrator for the club. He took an active role in recruiting his successors and did everything he could to ensure the team’s future success after his graduation. As the president and team leader, Gary’s importance to the program went beyond his talents on the field and his administrative duties. Gary, along with roommates Dick Abono and Mark Anderson, also provided the social hub of the program. The famous (and some may say “infamous”) Church Street house was the center of Cal Poly Lacrosse social life throughout the mid-1980’s and will live on in Mustang lore for years to come. After graduating from Cal Poly, Gary kept his playing career going, playing for Palo Alto and a few Seattle area club teams and continuing to give back to the game.

It is with great pride that we name Gary Schare as a 2017 inductee into the Cal Poly Lacrosse Hall of Fame.