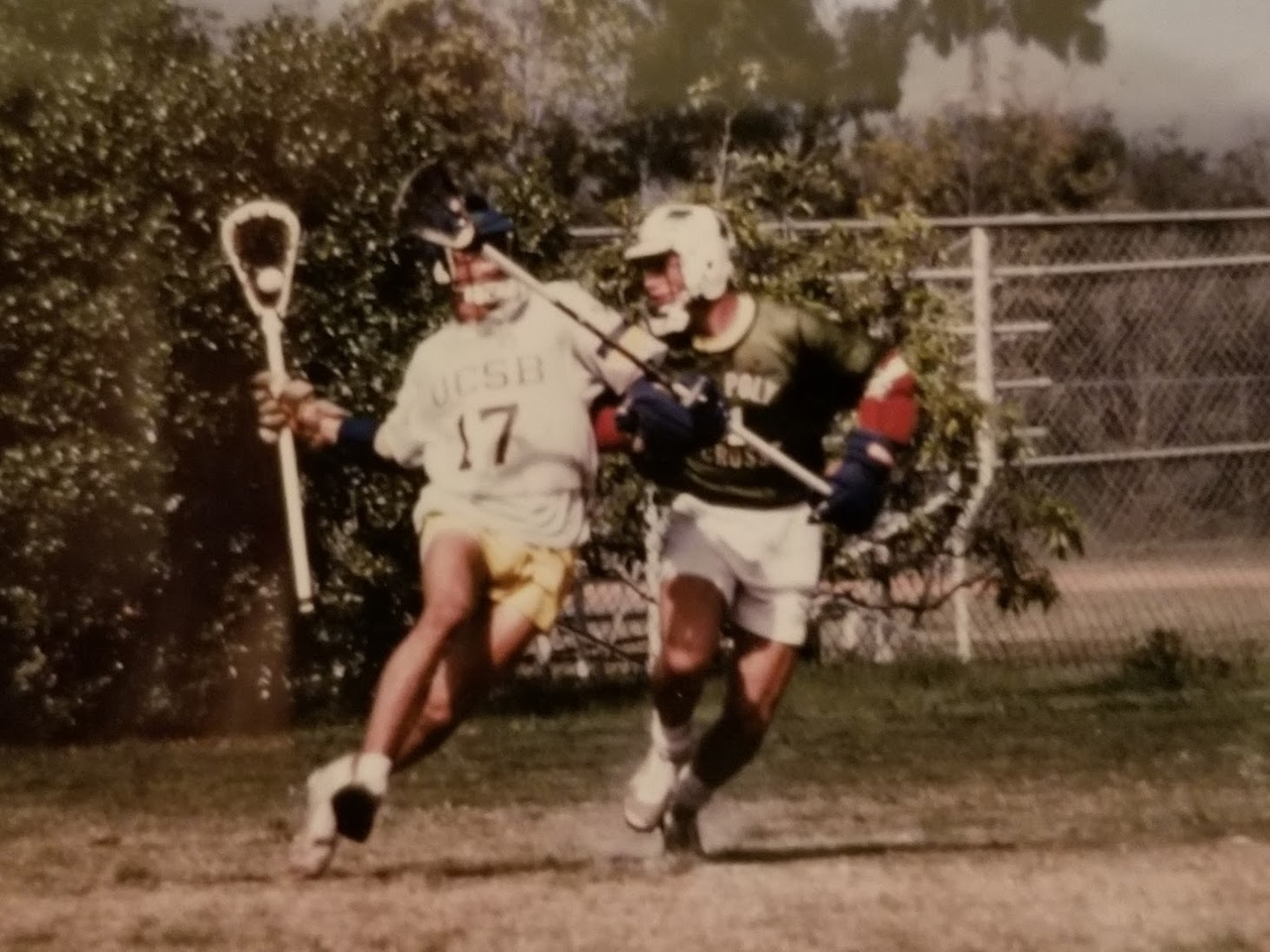 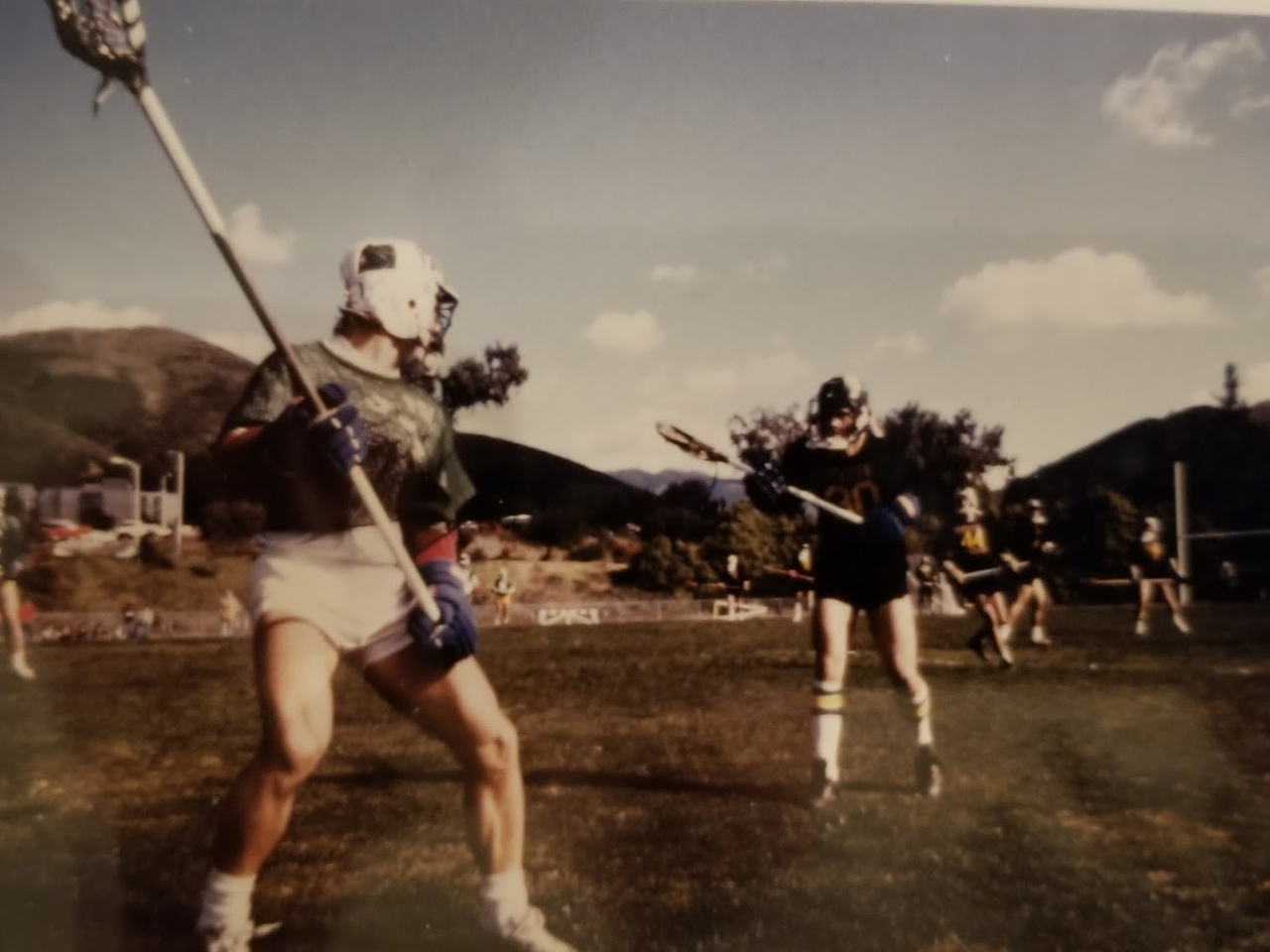 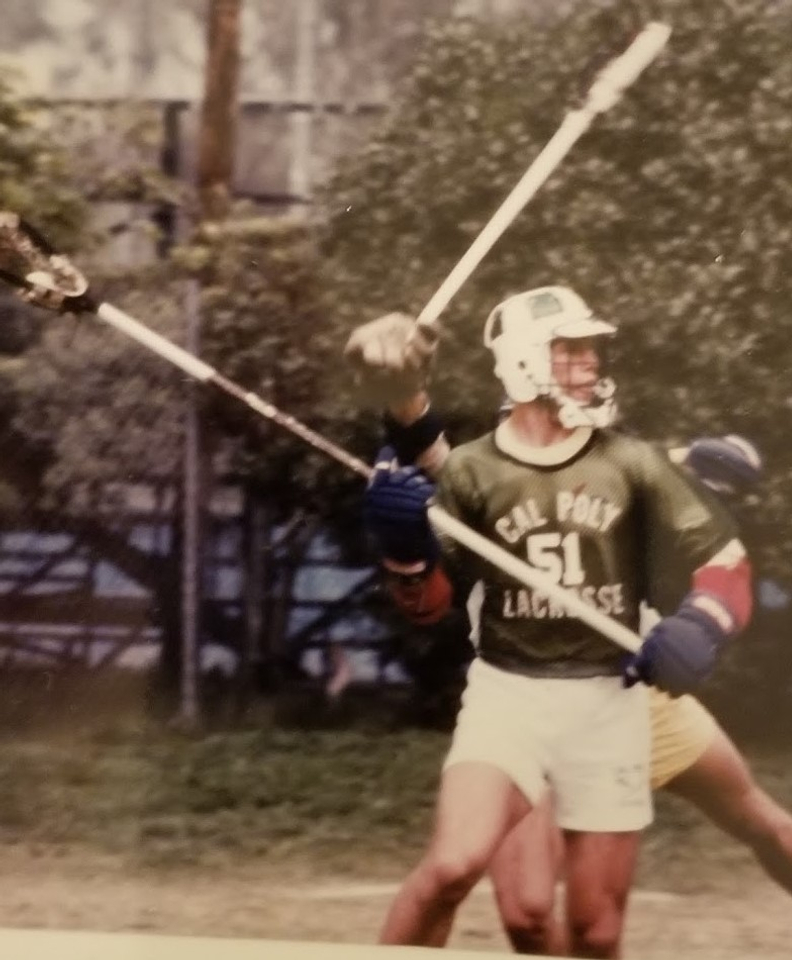 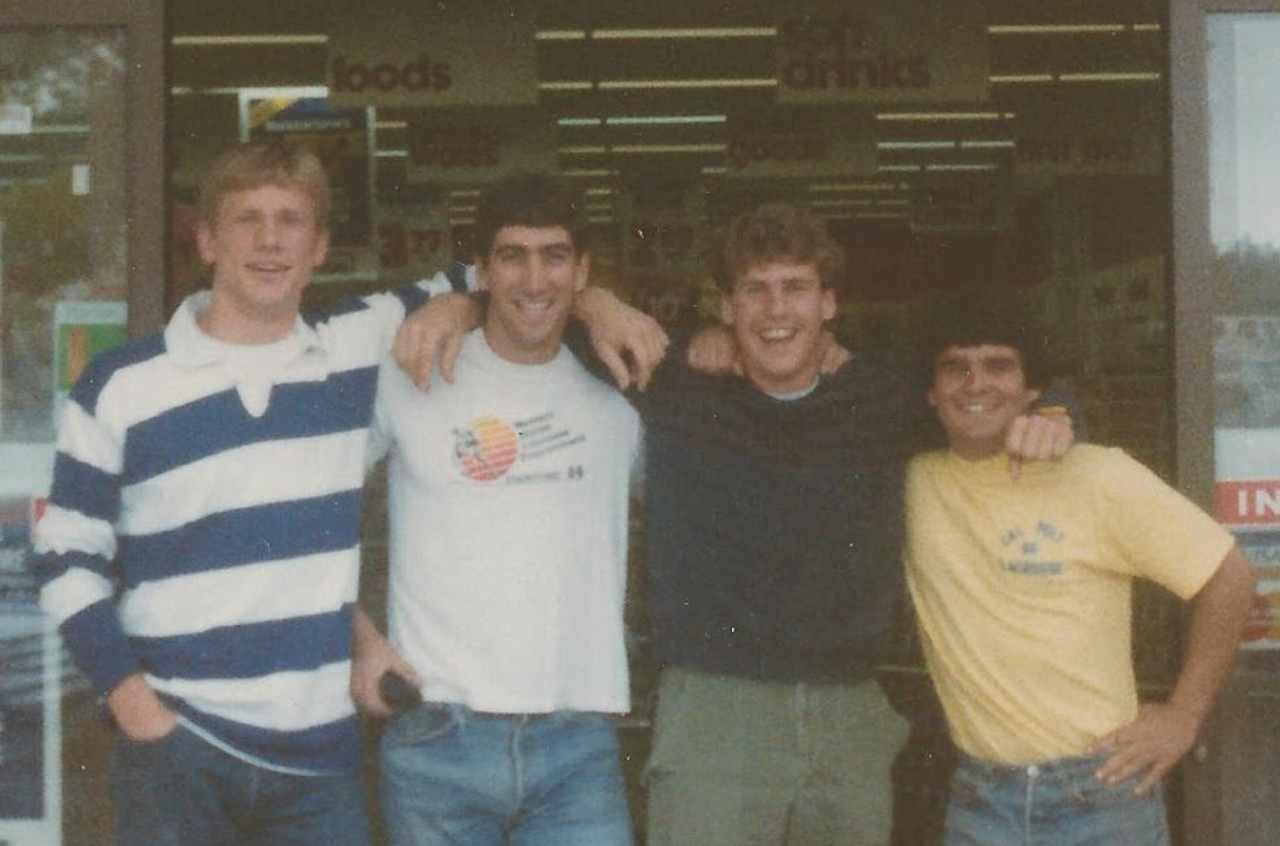 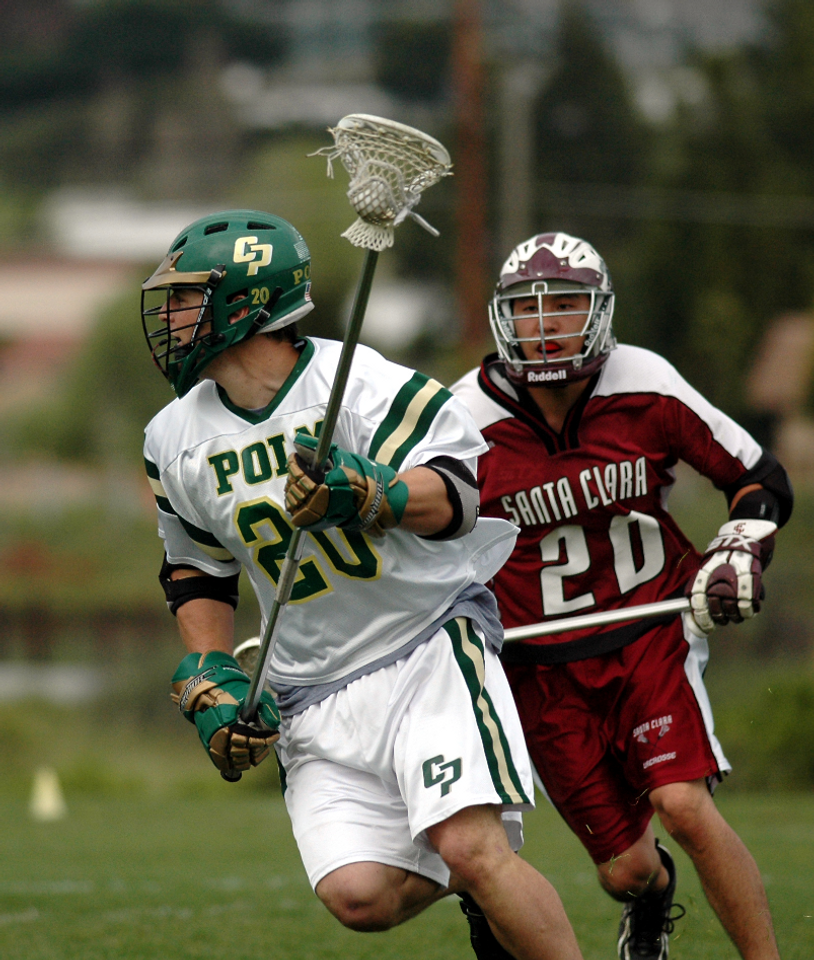 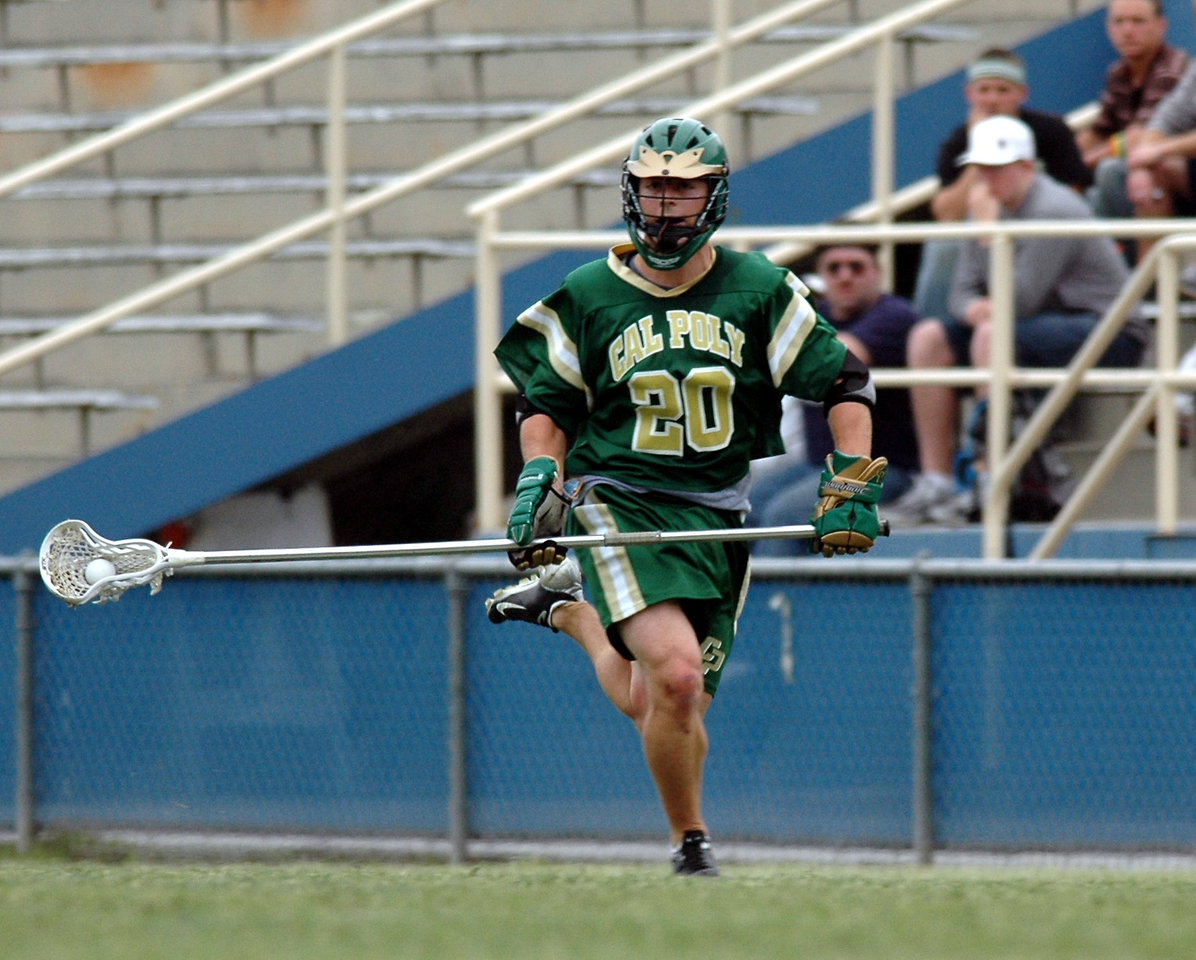 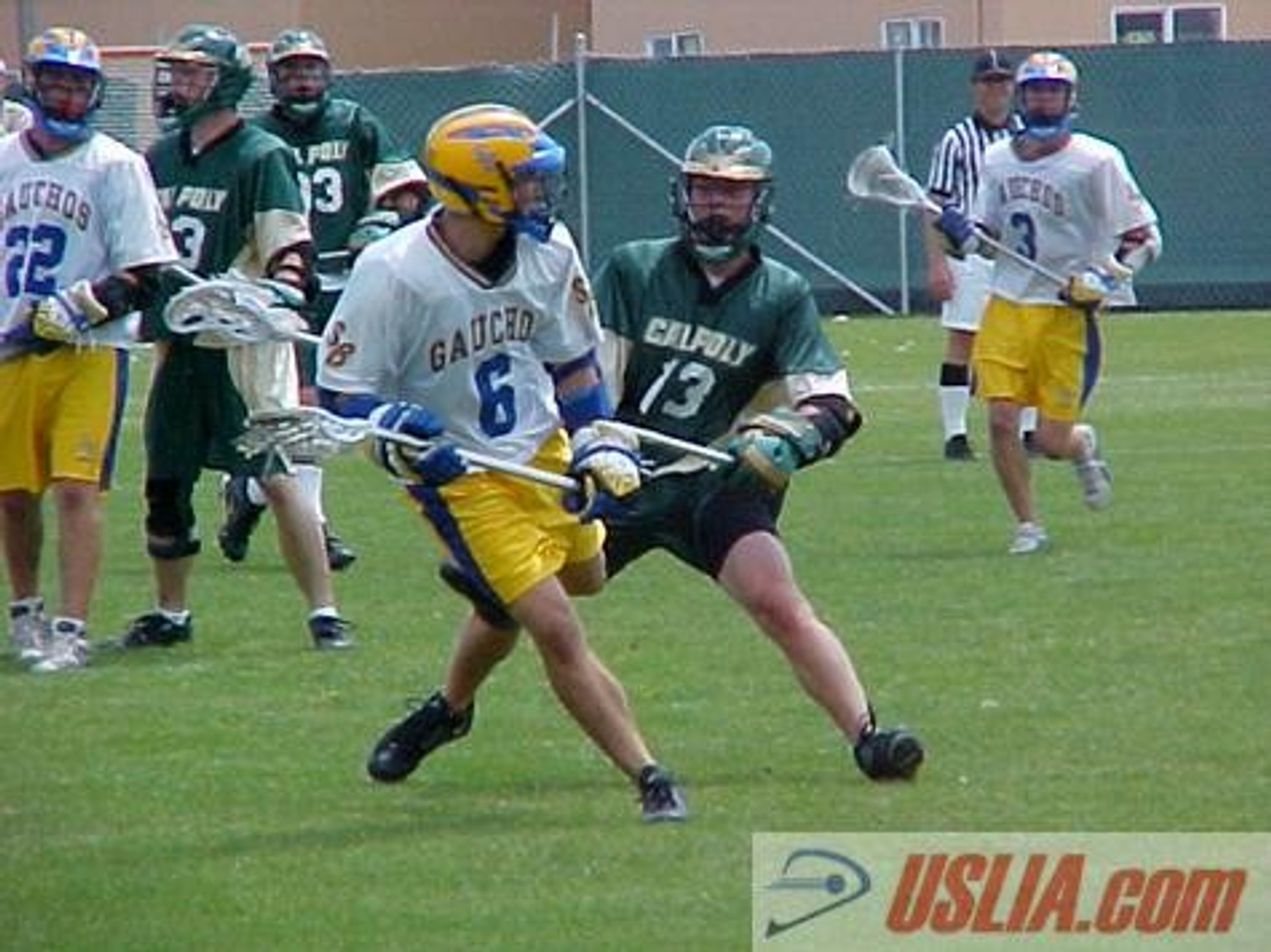 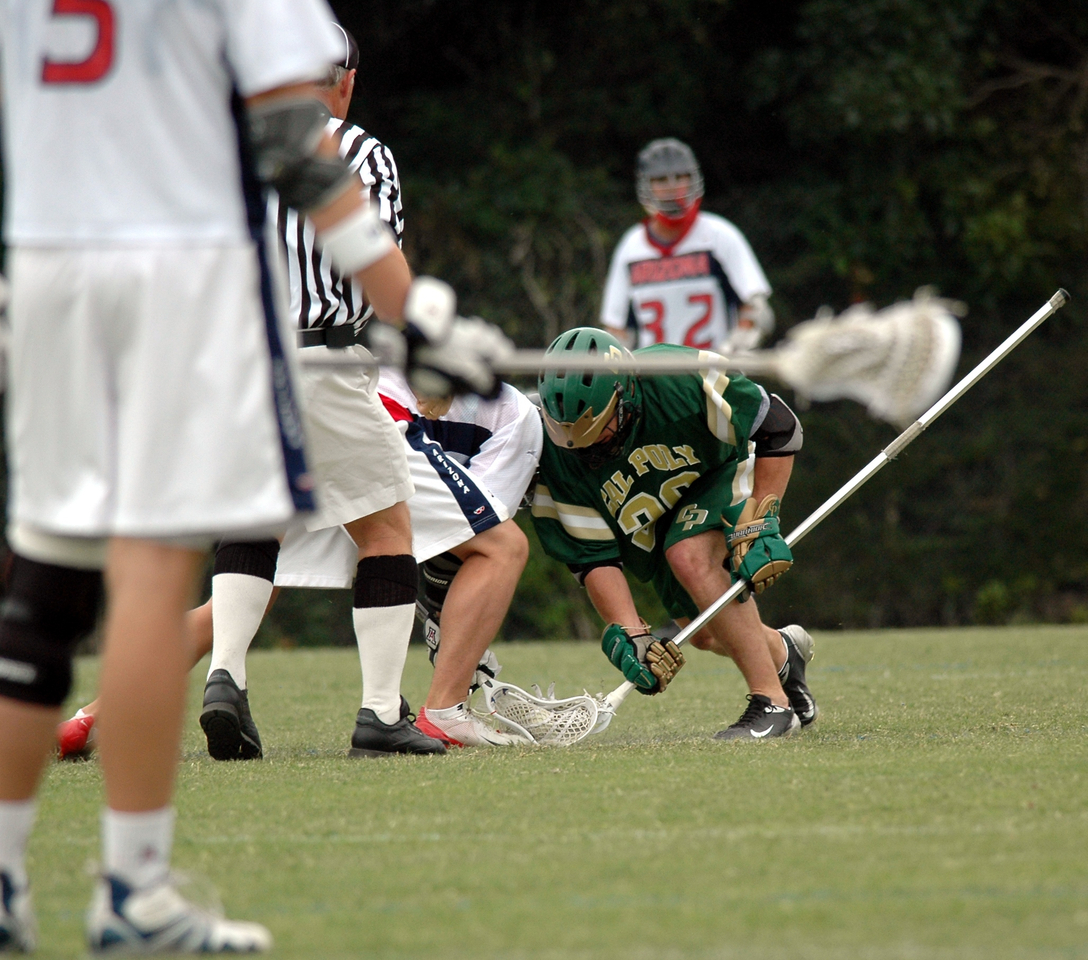 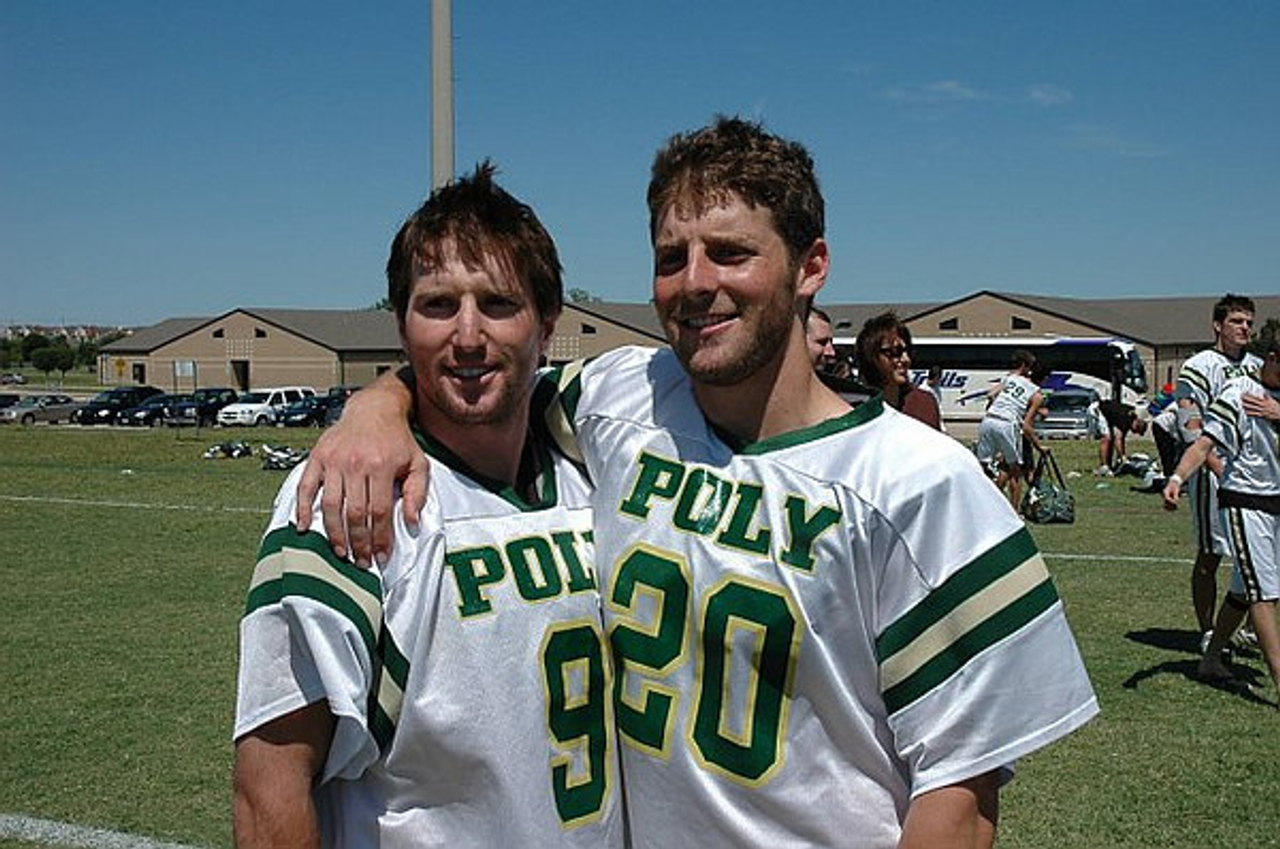 Stefan Bump (1982 - 1986): In the early 1980s, the fledgling Cal Poly Lacrosse program didn’t have the luxury of recruiting skilled players from established high school programs. Instead, it had to advertise on campus to attract players for this new-to-the-west-coast sport. Most who joined came into the team with a desire to learn that often exceeded their raw athletic talent. But there were exceptions - talented athletes who excelled at the new sport and made an immediate and lasting impact. Stefan Bump was one of those exceptions.

Stefan had never played lacrosse before seeing the sport at Cal Poly. He was a freshman in the fall of 1981 and hoped to walk on to the football team as a defensive back. At 6 feet and 185 lbs, that wasn’t going to happen. Then he saw a flyer for the newly formed lacrosse squad and decided to give it a shot.

Initially, he chose to play defense because ball-handling skills weren’t so critical, plus he thought long poles looked cool. He soon realized the physical aspects of the position played perfectly into his size, strength, and agility. With the name Stefan Bump and legs like tree trunks, he quickly earned the nickname “Stumpy” (his first of two memorable nicknames).

Stefan loved clearing attackmen and midfielders out of the crease, and was a machine when it came to stripping the ball, calling a middie back, and just taking off down the field. Stefan quickly garnered a second nickname “The Human Gilman”. While the “Gilman clear” was nothing more than a long heave down the field by a trapped goalie or defender, Stefan was virtually guaranteed to run through traffic, spin around a trapping attackman or three, and clear the ball on his own nearly every time he headed upfield.

One of Stefan’s earliest career highlights was scoring a goal against USC - the first ever goal recorded by a Cal Poly defenseman. During his career, Stefan tallied 8 goals as a defenseman, often kick-started by one of his bruising 80-yard clears. As recognition for his stellar individual defense and open field abilities, he was named a WCLL All-Star defenseman in 1984, ‘85, and ‘86.

During Stefan’s first season, Cal Poly beat Whittier College 7-4 in the WCLL South championship game. Within a few years, Cal Poly qualified for the Western States Lacrosse Tournament held at Stanford University where the team played the defending champion, Victoria Seaspray, a Canadian box lacrosse powerhouse. The 4-4 halftime score attracted thousands of fans eager to see a massive upset. The Seasprays ultimately prevailed, but Cal Poly was now on the map as a serious lacrosse program, with Stefan captaining the defense throughout that 1986 season.

After Cal Poly, Stefan played club lacrosse with the Santa Barbara Lacrosse Club (aka Coast) along with “Scotty” (2013 CPLAX Hall of Famer – Scott Graham) and “Jonesy” (2014 CPLAX Hall of Famer – Bob Jones) and a host of UCSB alumni. As a math major, Stefan says his lacrosse experience formed the most significant memories of his college years (priorities!). He adds, “My teammates were my closest friends and social crowd, and those are the memories I carry with me to this day.” 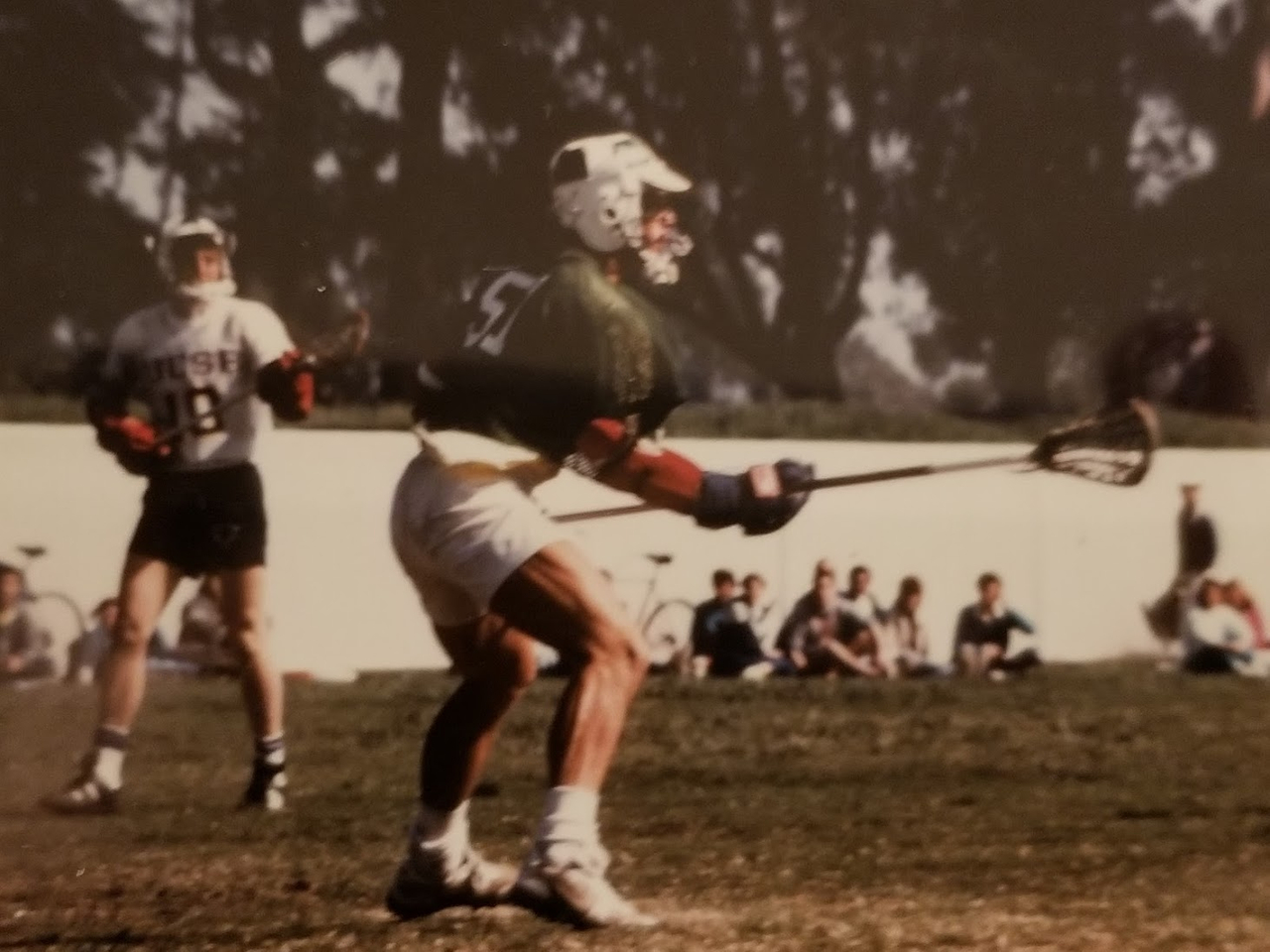 Ari Elden (2003 - 2006): Ari arrived at Cal Poly in the fall of 2002 after a successful high school football and lacrosse career at La Jolla High School. Although their playing careers didn’t overlap, Ari was following in the footsteps of another standout La Jolla Viking and future CPLAX Hall of Famer, Jim Fipp, as both Elden and Fipp learned the game by taking on the toughest lacrosse competition that the San Diego area had to offer. One of those early high school opponents that Ari had to cover was none other than future Mustang teammate and CPLAX Hall of Famer Tim Casey, who played for nearby powerhouse La Costa Canyon.

Building on his San Diego area lacrosse roots, Ari joined a Mustang program on the upswing that was fresh off their first ever trip to the National Championship tournament the previous season. The close defensive unit on that 2003 squad was talented and experienced, led by fellow future CPLAX Hall of Famer Aaron Myers along with Vinnie Consolo and Matt Faustman. Ari teamed up with Tom Alderman to handle the LSM position and helped round out an intimidating defensive unit. Ari was a menacing LSM, hounding overmatched midfielders, collecting ground balls by the dozen, and leading the charge for a Mustang team looking to push the transition game. Ari's versatility was critical to the team's success. Ari played close defense when needed, was a legitimate offensive threat tallying over a dozen points during his career, was an extraordinary wing player on face-offs, and even took a fair numbers of face-offs himself.

After solid freshman and sophomore seasons, Ari really hit his stride during his junior and senior years after moving to close defense. Despite predominantly playing LSM throughout high school and his first two collegiate seasons, Ari's move to close defense allowed him to impact the game even further. Ari anchored the defensive unit, not only drawing the opponents most talented attackman but acting as the vocal leader for the defense. After his junior year, Ari was awarded the team’s Defensive MVP award and was named to the WCLL All-Conference Honorable Mention team. Ari deserved greater recognition for his standout play that 2005 season, but these were the days when the WCLL was an epic conference stretching from Humboldt to Tucson, and 2005 was a down year for the Mustang program.

After suffering through a rare losing season and failing to make the national tournament in 2005, the Mustangs came back with a vengeance in 2006. Ari continued his tremendous play, but even more significantly developed into a true leader on and off the field. The 2006 Mustang squad was extremely talented but lacked a veteran goalkeeper, and Ari ran the defensive unit from his close defense position.

Ari’s leadership was recognized by both his teammates and the coaching staff. It’s Cal Poly Lacrosse tradition for the players to choose their captains during the fall for the upcoming regular season. There are often many well deserving candidates and the team has typically chosen 3 or 4 fellow players to act as their captains for the upcoming season. But in Fall 2005, the players unanimously chose Tim Casey and Ari Elden as their captains for the upcoming season, recognizing the talent and leadership that those two seniors possessed, and marking one of the few times that the Mustang squad was led by just two fellow players. The respect for those two seniors was that great, as it was clear that Casey and Elden were not just the best players on that team but also the team’s motivational leaders.

The 2006 season was a monumental year in the history of Cal Poly Lacrosse. Led by Casey on the offensive end and Elden on defense, the Mustangs tallied huge regular season victories over traditional powers like Oregon, Cal, BYU, and Chapman, and earned their fourth trip to the National tournament. After playing well but falling short in the first round during their prior trips, Cal Poly knocked off the Florida State Seminoles to earn their first big victory on the national stage. Ari’s efforts his senior season were recognized both inside the program and at the national level. Ari was again awarded the team defensive MVP award. He was also named to the WCLL All-Conference 2nd Team and was recognized with USLIA All-American Honorable Mention honors, only the second Mustang defenseman in program history to earn All-American recognition. 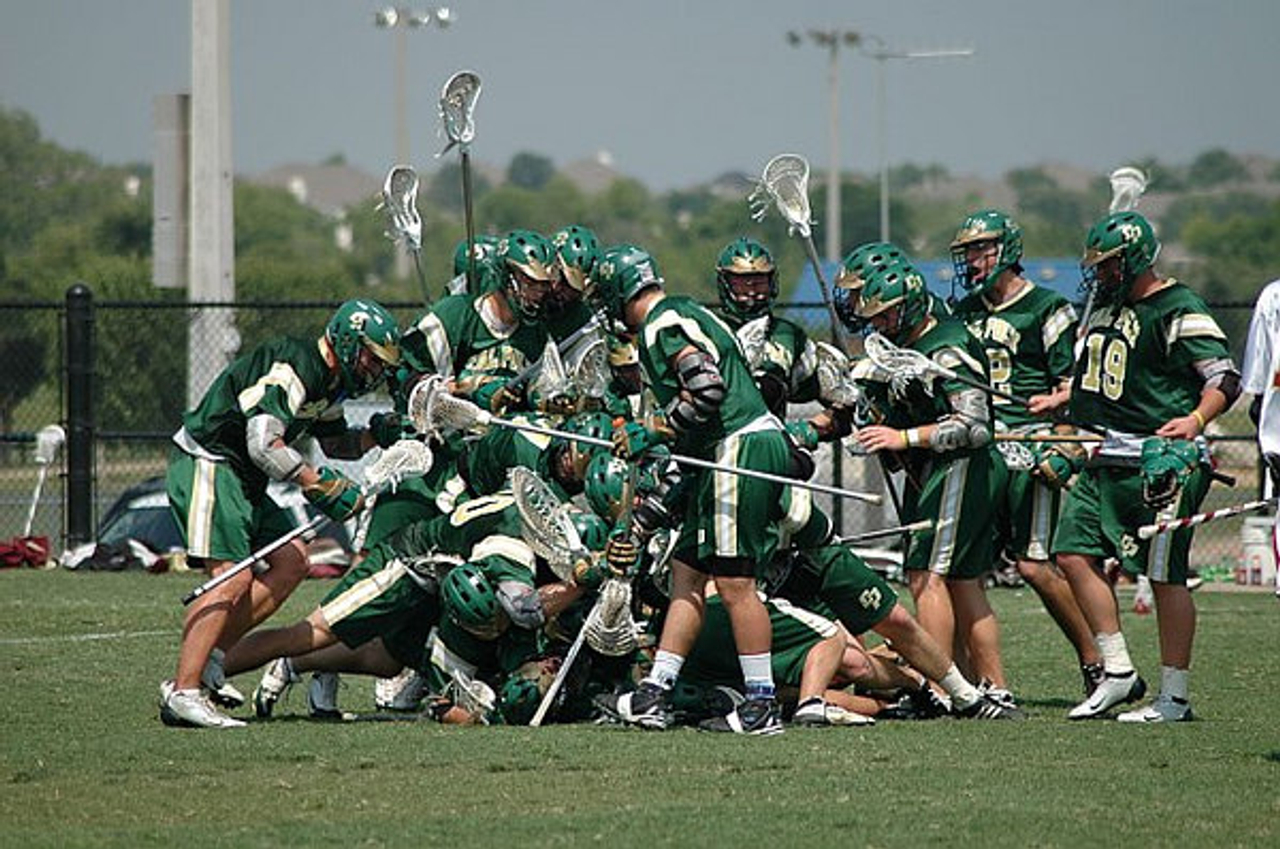